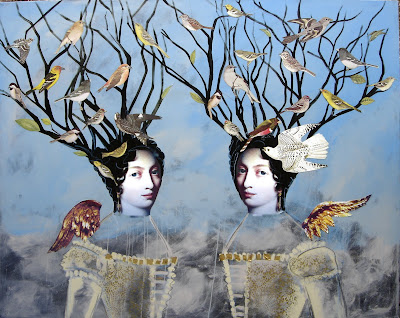 Louis St.Lewis' first solo show in Raleigh back in 1986 was al altogether singular production " a one-day sale out of the back of a Rent-a-Wreck limousine", as he recounts.

He saw two customers at a time and got everyone drunk: "we served mimosas without the orange juice, played jazz and made everyone feel privileged, like they were part of an inner circle. It was very seductive". And apparently it was very effective as well, as his customers chose images out of a catalogue that he would create for them.

Six months later he had his first, more conventional, solo show at Gallery C, though if memory serves, he did arrive in a white stretch limo. I think few who ventured into his early exhibitions have managed to forget the decorated human bones emerging from overhead chandeliers, bones at once macabre and beautiful.

St.Lewis' willingness to employ unconventional venues applies to more than rented limousines. As a featured artist for a New Orleans art fair last October, Art for Art's Sake, he placed images of burlesque dancers above bras and panties in a lingerie shop. "If someone came in to buy lingerie for his mistress, " St.Lewis explained, "They might look up and buy the painting as well." His more familiar mirrored images of birds and flowers were showcased in an interior design store. " I made good money in both places," he remarks with obvious satisfaction. In September, he revealed a series of collages, transfers and paintings at a Chapel Hill boutique, Toots & Magoo, which were some of the most striking, enticing and serious of his work I've seen of late. The artist describes them as taking an entirely new direction, " approachable and elegant." " A true artist," St.Lewis insists, "must express himself in a million different ways."

I confess that I am tempted to assert that everything that can be said about the ever changing art of Louis St.Lewis and the mercurial persona who goes by that name has been said over and over and call it a day. But then I would have to deal with his latest show in Chapel Hill, with my own experience of constant surprise at new turns in his work, and with the artist himself, who recently spent several hours leaning against a wall in my studio, revealing himself as a spokesman for all that is odd and peculiar in the world of art.

During the interview St.Lewis regaled stories from his younger years. For example, when he was 18 he "stole" his mothers Jaguar and took off to California with a friend. After visiting Disneyland, he moved in with his friend's mother, who " gave guided LSD trips." As everyone who has ever interviewed St.Lewis knows, there are contradictions in almost everything he says about himself. His schooling? " I was the one who was always drawing in my books instead of reading them. I was the one who cut up textbooks when I shouldn't have been doing that."

On the other hand he speaks fondly of having read the volumes of a 1935 encyclopedia from cover to cover. "It had all the basics- it was full of mythological references, natural history, biographical references"- precisely the delightful potpourii we often find in his assemblages. And in the sixth grade, he notes, this infamous slasher of textbooks was sent off to a summer program at Western Carolina University which hosted a program for gifted and talented students and continued to spend summers there through his senior year. ( Louis' I.Q was tested over 140- genius level)

Art School? He lists six that he claims he was " kicked out of". But once he started to paint, transfer, assemble, and sculpt in earnest, giving new symbolic meaning to images- meaninhgs they could otherwise never be expected to reveal-he has never lacked places to hang his beret.

St.Lewis feels that a significant show requires a significant setting. In October, he expects to open a show at The Mahler on fayetteville Street, and as he described the kind of show he would like to mount, quickly listing possibility after possibility, I could only pity the gallery. " I'm going to completely take over the space and transform it. I want to do something that suggests Old Europe." The art world, particularly the local scene, needs more theater, he insists. " You look at any of our great artists, and they were as much known for their theatrics as for their art. I would as soon make a fool of myself than not make the effort."

And, if pressed how would he describe his own work? " Inquisitive, Playful.Witty.Kinky Referential, though I would add, certainly not reverential." I like what Tom W. Jones, director of the Museum of the Southwest, said about him. " I realized that St.Lewis is one of those individuals whose meaning doesn't stop at the edge of the canvas, Instead, it infuses all aspects of his life, from the way he talks to the way he dresses to the way he decorates his environment where he lives and works. One one level, he's a performance artist for whom the performance never ends, and his individual paintings, collages and assemblages are props and pieces of the constantly evolving stage set that his studio and the world-at-large comprise for him".

[ Max Halperen is a familiar figure in the local art scene and has reviewed art for local regional and national journals. A professor emeritus, he taught contemporary art history and literature at NCSU.]
Posted by Louis St.Lewis at 12:01 PM