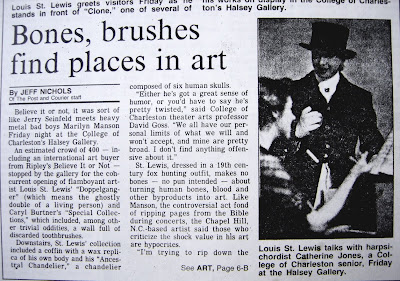 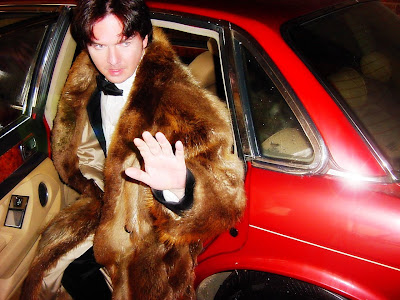 Bones, brushes, find places in art
The Charleston Post and Currier
by Jeff Nichols
Believe it or not, it was sort of like Jerry Seinfeld meets heavy metal bad boys Marilyn Manson Fridaynight at the College of Charleston's Halsey Gallery.
An Estimated crowd of 400 - including an international art buyer from Ripley's Believe it or Not and The Lady Chablis from The Garden of Good and Evil stopped by the gallery for the concurrent opening of flamboyant artist Louis St.Lewis "Doppleganger" ( which means the ghostly double of a living person) and Caryl Burtner's  " Special Collection" which included among other trivial oddities, a wall full of discarded toothbrushes.
Downstairs , St.Lewis collection included a coffin with a wax replica of his own body and his "Ancestal Chandelier"  a chandelier composed entirely of human skulls and bones.
" Either he's got a great sense of humor, or you'd have to say he's pretty twisted", said College of Charleston theater arts professor David Goss.  " We all have our personal limits of what we will and won't accept, and mine are pretty broad,  I don't find anything offensive about it."
St.Lewis, dressed in a 19th century fox hunting outfit, makes no bones - pun intended- about turning human bones, blood and other byproducts into art.  Like Manson, the controversial act fond of ripping pages from the bible during concerts, the Chapel Hill, N.C.- based artist, said those who criticize the shock value of his art are hypocrites.
"I'm trying to rip down the hypocrisy of church and society," St.Lewis said.  The people who complain about my art are the same ones that support the death penalty, but they get all squeamish at seeing the results of their votes."
Though it's art with a message, St.Lewis is quick to point out that he doesn't take it too seriously. Neither should we, he said.
"All I'm trying to say is have fun with life while you can," he said. Listen to what he said about the skull chandelier . " It's a lot like Charleston.  Lots of good bones and some skeletons in the closet. And I never have to eat alone."
Dozens of Charlestonians in the past week including the Bishop of Charleston have called Halsey Gallery curator Mark Sloan  to say that St.Lewis' art is not funny at all.  It's sacrilege, they told him.
Over 100 other callers congratulated Sloan for bringing St.Lewis' brand of pop art to Charleston, Sloan said. " It's a great responsibility and a burden to be really the only outlet in the city for this type of unconventional art.  This is something we haven't ever seen around here before.  It's stretching the boundaries of what we think of when we think of art."
If it stretches those boundaries too far for stately old Charleston, no one here seemed willing to admit that Friday night.  "Absolutely not," said one man peering into St.Lewis's coffin. "Anybody with an open mind who appreciates art won't find this offensive at all."
What did the Ripley's guy think of all this?  He came specifically to check out St.Lewis' spooky chandelier.   "I't's classic Ripley's Believe It or Not" said Ripley's vice president Edward Meyer.  Why would someone do this?   I'm interested, and I think our patrons would be."
The exhibitions will be displayed until Feb. 25. The gallery is open Monday through Saturday from 11.am, to 4 p.m.   Admission is free.
Posted by Louis St.Lewis at 5:43 AM